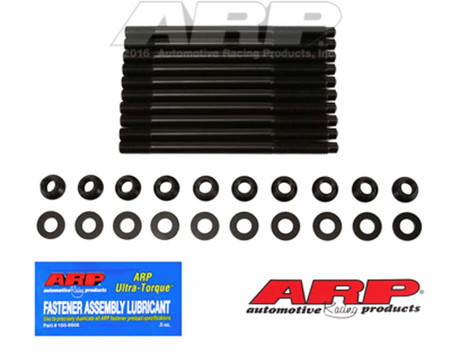 ​
ARP studs are 8470 chrome moly steel, heat-treated to 200,000 PSI tensile strength, and precision J-from thread-rolled after heat-treat resulting in a fastener that has threads 2000% stronger than others.

ARP recommends studs are over bolts because of the ability to obtain a more accurate torque reading studs provide over bolts. Studs don't twist as they are fastened down. Additionally, because of this there is less force exerted on the thread of the block, which results in increased block life, especially on aluminum blocks.

Head stud kit - to bolt the cylinder head to the engine block!

Replace your stock head bolts with ARP heavy duty head studs. The stud design helps the head and the block equalize the pressure better thereby creating a much more even and consistent seal. It is recommended to replace the head studs/bolts with a new set if the head bolts are ever loosened due to metal fatigue. Reusing an old and possibly warped or stretched head bolts/studs will sacrifice the seal between the head and block and may cause head gasket leak. This is a great an easy upgrade when doing an engine rebuild or building a race motor.