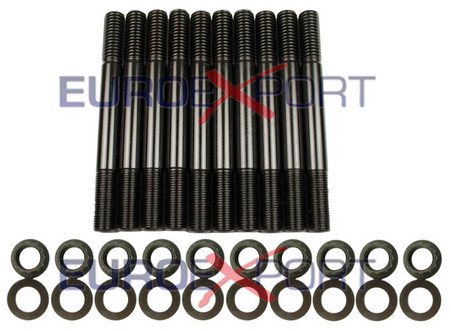 Custom 1/2" ARP Head Stud Kit. Kit comes with (10) head studs, (10) parallel ground washers, and (10) 12-point nuts needed for a direct bolt on, as well as the ARP moly-lube and instruction sheet. Studs are 8470 chrome moly steel, with a black oxide coating for corrosion resistance. The studs are thread-rolled after heat treat, and center-less ground which results in a studs that has 2000% better fatigue strength than others. ARP studs are rated at 200,000 PSI. Using studs will make it much easier to assemble an engine (especially a racing power plant which must be serviced frequently and quickly!) with the cylinder head and gasket assured of proper alignment. Studs Provide more accurate and consistent torque loading ( When you use bolts to secure the head, the fastener is actually being twisted while it's being torqued to the proper reading. The bolt is reacting to two different forces simultaneously. A stud should be installed in a relaxed mode - never crank it in tightly using a jammed nut. If everything is right, the studs should be installed finger tight. Then, when applying torque to the nut, the stud will stretch only on the vertical axis. 1/2" diameter stud. Cylinder head and block need to be drilled and taped to accommodate the larger studs. Application : Toyota 2RZ 3RZ engines